At 35m high, the Free Fall was easily the fastest ride at the Beach area. Once you made your way up the 20 flights of stairs, and as long as you were over the height restriction of 137cm (which was the highest in the park) you could hop on and ride.

Riders were instructed to ride in the position on their backs, legs crossed at the ankles, and arms crossed accross their chest. The ride was over in about 10 seconds, but you would hit speeds of 70km/h.

When it first opened, the ride was equiped with a finish line and radar system so you could race your friends and see your speed. It became quite faulty over years, and this system was removed in the mid 90's.

It was important to ensure that water levels in the ride were at the right level, too low and a big heavy person would end up in the back board at the end. Too high and there was the potential that a guest could bounce out. Which occured one day as a guest came down the slide, and hit the small wave that had bounced off the back board from the previous guest and was coming back along the slide just in time for him to come down, hit the wave and bounce out of the slide. Only a few minor grazes was all that resulted.

It was always important to pick the wedgie out of your bottom when you got to the bottom of the ride also, preferably before you stood up. 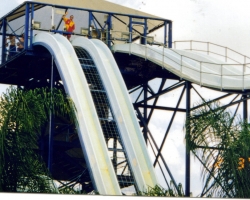 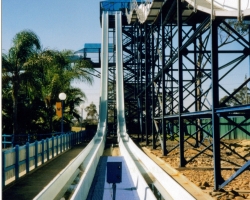 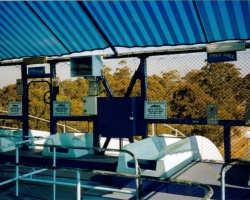 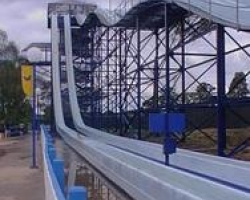 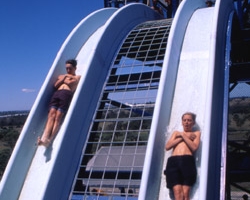