We arrived at the park at about 9.30am, and came into the administration building.

All of the office cubicles etc have been ripped out and relocated to the training room, and the office floor is covered with an assortment of junk from the park. old floodlights, cash registers, stuffed toys, framed pictures and other paraphernalia. We took a tour upstairs to the executive offices, where there is more framed pictures etc etc. lots of old black and white photos of the park, and canada's wonderland (the park Sydney was based on). lots of other posters from years gone by litter the floor all over the place. (for those interested, they have a slice of timber log, with the original Australia's Wonderland logo burned into it... its nice but i wasn't prepared to buy it.)

Then we took a tour out into the park. A lot of backstage fencing has been removed on the way up to the park entrance at the front gates. As we walk into international village (or botany bay) all of the chairs and tables have been removed outside bounty burgers, and the roof has been removed off the bounty's revenge side of the food outlet. The fountain is drained, the paving has lots of weeds growing through it, and a lot of the pavers have been removed, with removal still underway in transylvania, with pallet upon pallet of pavers stacked up ready to be removed. Bounty's revenge still stands, and we walked up to the lake. now fully drained (maybe a small pool in the bottom from rain) but the lake for those interested is about 6 metres deep in the middle, and it drops sharply at the sides. Lakeside has been completely demolished, all chairs and tables gone, and the piers over the water are gone. all of the signage has fallen apart and is sitting on the bottom of the lake in pieces.

As we walk up along "IV" toward dodgems, the carousel space is now just a plain concrete slab. all of the skill games have been stripped bare.

Entering Transylvania, it is strange not to have the "creature" growling from its tunnel. more weeds, and the grass in the gardens has overgrown. it is from here we got our first close up view of Demon, undergoing demolition. the "demon" gates are closed, with all sorts of safety and contruction signs posted on it. two cranes are around the ride, and the entire boomerang is now removed. both lift hills remain standing, the 3rd loop, and the drop from the boomerang is still up there, so the drop looks like an evil hook just sticking up in the middle of the sky.

We could not go inside of probe, but the only thing that has changed there is the pre-show tv's have been removed. Heading up towards HBL, the pathway is covered in dirt and muck from all the trucks going up and down.

Zodiac, contrary to popular belief, is holding up well. it is still completely intact, however is completely level due to the equalisation of the hydraulic fluids. all gondola's are still complete.

Galaxy Theatre - Tony Laffan's old home, is in a shambles. the marquee has fallen down everywhere, the roof has collapsed. we took a tour of the stage areas, including the secret trap doors, the tiger-run, dressing rooms etc.

The rest of HBL have fallen apart. the only rides still within HBL was Beastie and Skyrider. all of the shops, outlets, etc we pathetic. grass, dirt and garbage were everywhere. the magic tree theatre still stands, although looks slightly worse for the wear.

Dragon's flight having been removed prior to the park closure, nothing has changed here. still a big empty concrete slab. "planes" as most people know them, have been removed from transylvania, and captain cavemans clippers (galleon's graveyard) was in the process of being torn down during our visit.

Action Arena has no seats, walls, fences or anything else, however the oriignal building housing the dressing rooms etc are still there.

Balloons has disappeared, Endeavour is dismantled, but still remains on its original site in pieces.

Tassie devil's site is still as was at closure.

The bakery is all boarded up with pretty much anything they could find, including old signage etc. the skill games in goldrush are torn down, some without even a roof.

The blacksmith's shed still stands, and still has a few items here and there. old time photos has its velveteen drapes, a piano, some coathangers, and thats about it. the arcade is a shell, the remote controlled boats have been drained, although most of the facades are still there, but all the controller units etc are gone. the heli-tours building, which used to be a retail gift shop, and before that who knows is levelled. nothing but a concrete slab. the eating areas in goldrush have been levelled, no chairs, tables, or roofs.

Ampol's Antique Autos still stands as is, with cars still on the tracks, however the entire ride has been purchased.

Skyrider still stands in goldrush as well. all of the games down the bottom of goldrush are standing, but nothing is there, and the arcade building has been levelled.

Snowy River Rampage could still be operated in its current condition. everything is in readiness, and it appears the pumps and all the rest of its associated equipment are intact. the control panel has gotten a little filthy, but looks ok. the holding lake for snowy has NOT been drained.

Bush Beast also still stands, but the trains have been moved out to the back of the property.

The Beach walkway, from bush beast to the pool area used to have pine poles lining it as a fence. these have been cut off at ground level to allow vehicles easier maneuvering in and out. the beach pools are stagnant, with all sorts of things in the pool themselves. there are no shade sails or anything still up, and all of the palm trees etc have been removed.

Maintenance around the back of the beach is littered with parts of rides, although Tassie Devil has been removed from the maintenance area. There is a mould for the plates of the space probe shell, and some carousel items that were HB themed such as jabberjaw, yogi, scooby etc. the only thing in the whole park that looked like it was in decent condition was the garbage disposal unit out the back of maintenance, which was a brand new cleanaway compactor.

On our return to admin, I took a trip down memory lane by walking down through into wardrobe and the lockers. i came across bits and pieces of operaitonal paperwork littered across the floor.

So all in all, i cannot describe how I felt going through the park one last time. I was happy that i got to see it again before it was levelled, but sad to see what it had become.

out of my visit, i picked up -
assorted park brochures, maps, blank tickets, french fry boxes and fast food paper bags, hat pins, badges, keyrings, magnets, drink bottles, posters from 2004, and posters from 1985, 1986, 1987, and 1990, and also one circa 1994. thimbles, photo frames, as well as the "demon ride photo" frames, hats, flags, pennants, a few stock photos from 1986 or thereabouts, and overhead black and white photo from 85 of HBL in its original state, stickers, bottle openers, as well as the old style 1 litre glass Coke bottles used on one of the skill games - these are collectors items! as well as all sorts of little bits and pieces.

i picked up a couple of promotional videos the park used to have, from way back in its original days to current, the park music cd, and a lot of memories.

I will always remember Wonderland Sydney.....

....but i would prefer to remember it as Australia's Wonderland, build by Kings Entertainment company in conjunction with Paramount, based on canada's wonderland, and funded partly by the New South Wales government.

Whilst I am appreciative of the opportunity to tour the park prior to its closure, I am still dismayed at the decision Sunway made to close the park. 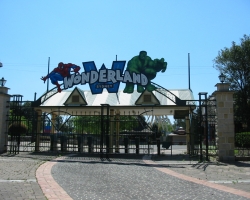 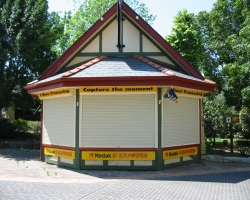 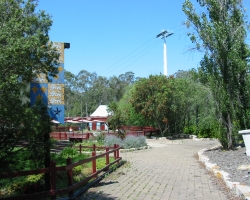 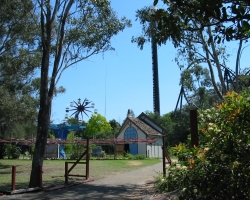 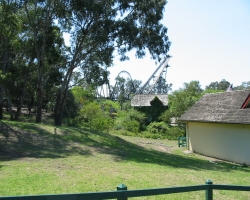 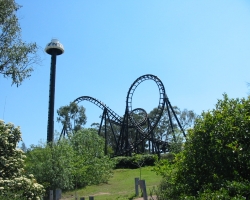 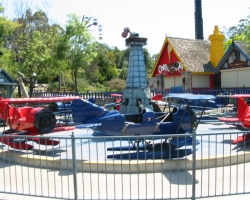 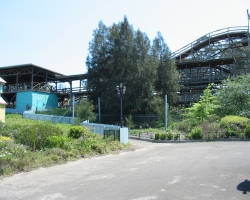 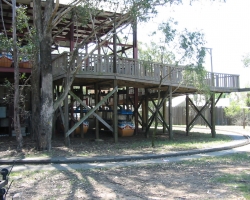 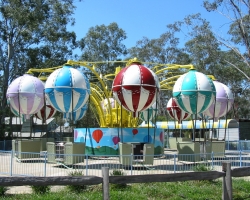 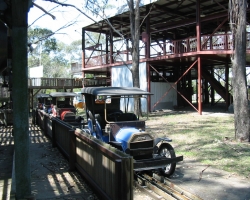 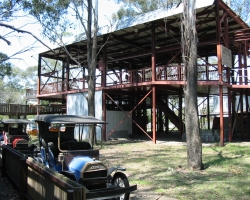 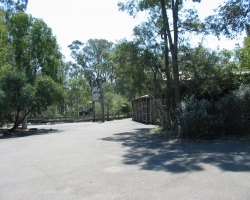 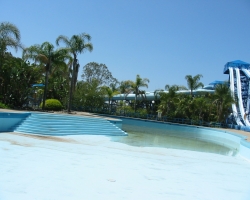 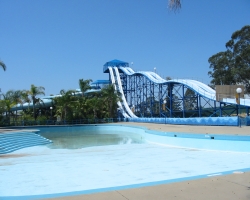 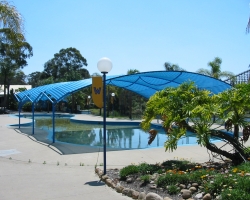 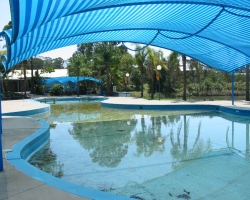 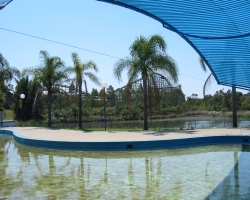 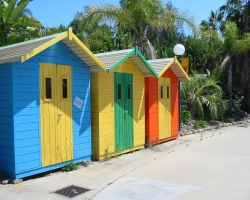 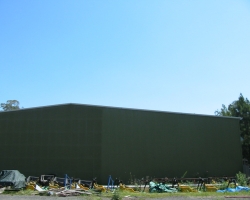