12 February 2004
ING Industrial Fund teamed up with The PacLib Group to buy wonderland.

Hartford Lane Pty Ltd entered into a Put and Call Option Deed with Paclib Industrial Pty  Ltd to dispose off Wonderland Sydney, the land measuring 58.87 hectares (Lot 11, Plan 1025320) and buildings, structures and theme park rides thereon for a total of $52.5 million AUD, excluding Goods and Services Tax, paying $10 million at exchange and the balance payable on settlement in January 2005.

Hartford Lane Pty Ltd is a wholly-owned subsidiary of Eastern Glory Enterprises Ltd.
Hartford being the Trustee of Sunway Australia Unit Trust , the registered owner of the Property.

Paclib Industrial Pty  Ltd  a special purpose vehicle with a paid-up share capital of A$2.00.

16 February 2004
The Sunway company announced that International Theme Park Pty. Ltd. the operator of Wonderland Sydney would close its theme park operation by middle of 2004 as part of the Group's overall rationalization exercise to exit from non-performing business units.

The Board of Directors wishes to inform the Exchange that International Theme Park Pty Ltd  (a company incorporated in Australia), the operator of Wonderland Sydney in Australia will be closing its theme park operation latest by middle of this year. This decision was taken in view of persistent losses incurred and difficult market conditions.

February 17, 2004
Wonderland's chief executive Stephen Galbraith said the park would close its gates because of a number of challenges faced by the tourism and leisure industry in recent years.

He cited events including September 11, the Ansett and HIH collapses, bushfires and SARS.

When we took over eight years ago, the park's future was uncertain, Since then, we have lifted the overall performance of the park, completely rebuilt its image and brand awareness but this had not been enough. Wonderland's 400 employees would get their full entitlements and help to find new jobs. 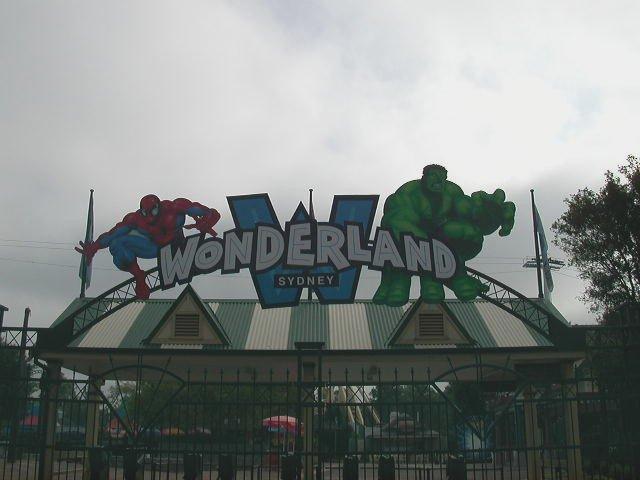 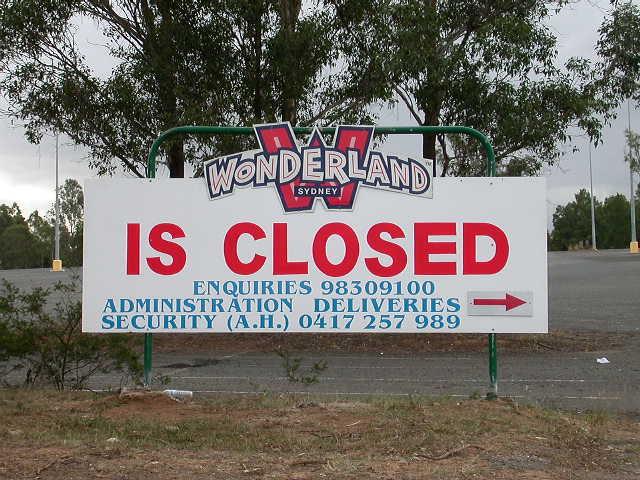 June 2004
A Heritage Order for the Bush Beast was submitted to Blacktown Council.

June 16 2004
The yellow Bush Beast train was sitting at the top of the lift hill.
Dragons Flight, Merry-Go-Round and Baby Bumpers were put in shipping containers and sent to 'Sunway Lagoon' Malaysia. 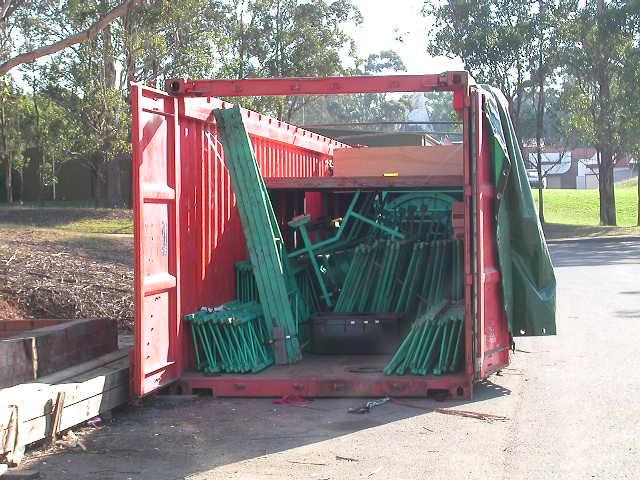 Dragons Flight in the shipping container.

June 17th 2004
Wonderland became a danger-land training environment for soldiers of 5 Bde’s Reserve Response Force (RRF) during the conduct of Exercise Ferris Wheel.
The space probe, demon and the snowy river rampage where reported to be seen operating from outside the park.

Aug 7 2004
The space probe and the demon were operating and the guysers on the snowy river rampage where going off.

August 2004
All 14 Bush Beast and 10 beastie carriages where moved out to the maintenance area by one of the wonderland maintenance crew still working at wonderland after is closure. 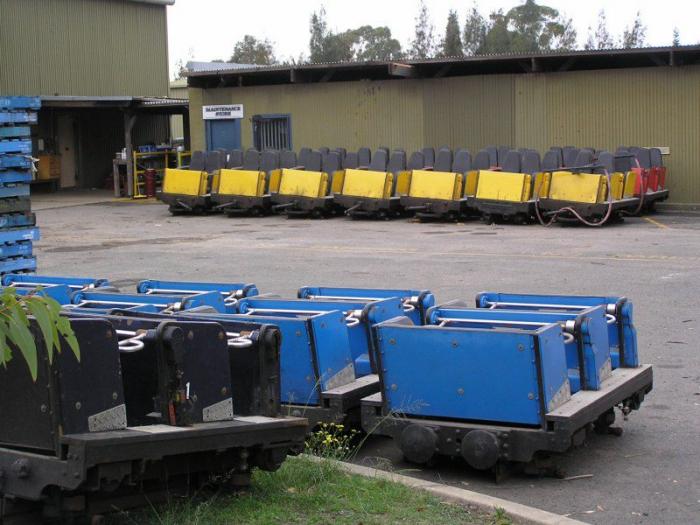 Who would've thought that they would ever see all 4 trains together?!

September 2004
Bush Beast and Beastie carriages where moved from the maintenance area, out to the back paddock behind Minchinbury reservoir

Bush Beasts Yellow PTC Train, minus two cars, under the cover of the stables in the back paddock behind Minchinbury reservoir. 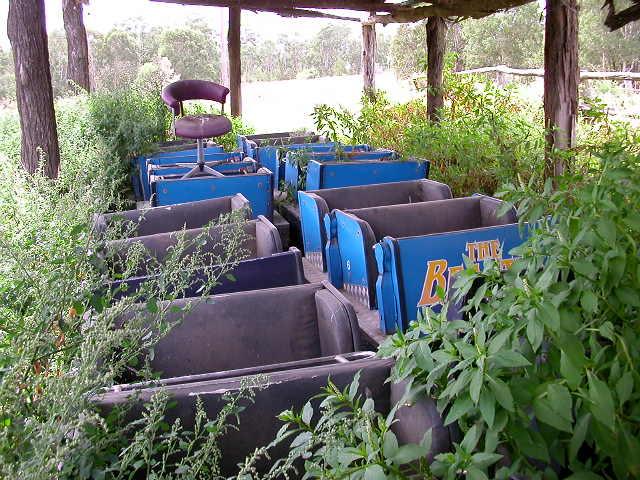 Beasties two blue PTC Trains under the cover of the stables in the back paddock behind Minchinbury reservoir. 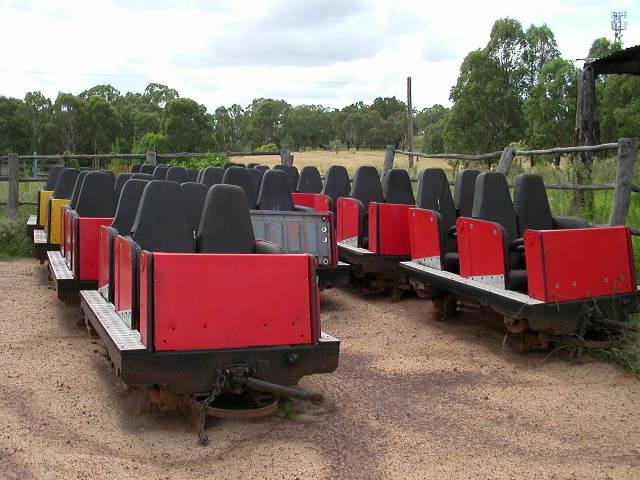 November 2004
The Lake was drained, there was heaps of stuff under there that had fallen out of people'e pockets over the years while on Bountys Revenge. Lots of money, Jewellery and Mobile phones.

Most of the rides still on site where removed.

Bounty's Revenge was dismantled and sent to Sunway Lagoon.

The Great Balloon Race was dismantled and taken off site by its new owner.

Galleon's Graveyard was dismantled and taken off site by its new owner.

The Broken Hill Mill Games Arcade in Gold Rush was dismantled and taken off site by its new owner.

Little Monsters Flying School was dismantled and taken off site by its new owner. 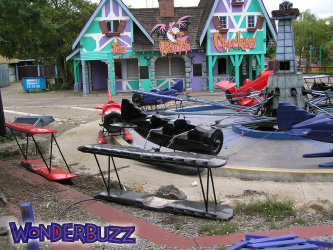 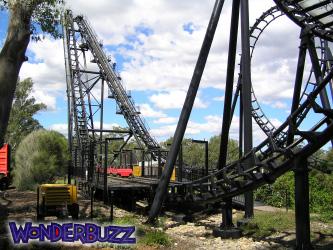 DECEMBER 2004
The Electricity to the park was turned off in the main high voltage switch room.
Demolition of the park starts. 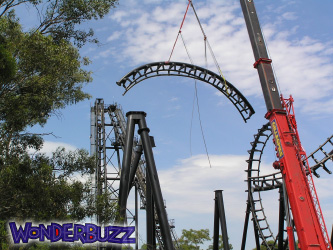 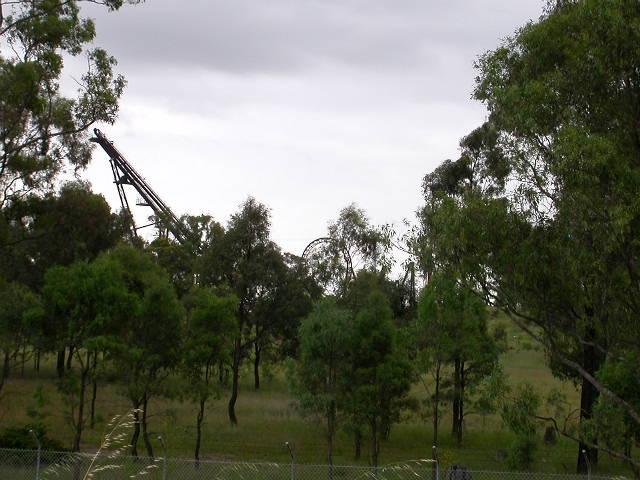 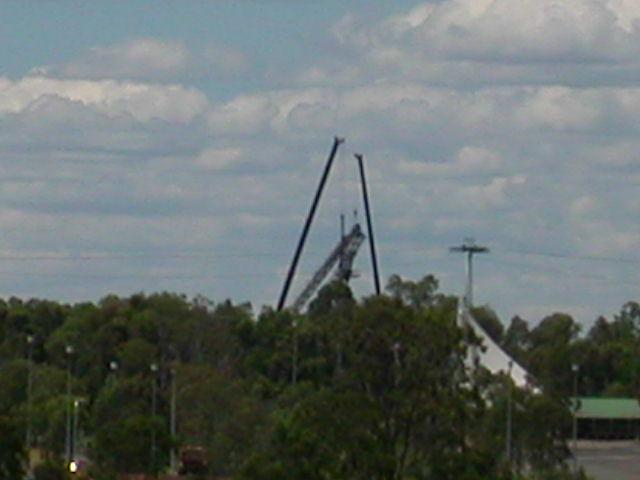 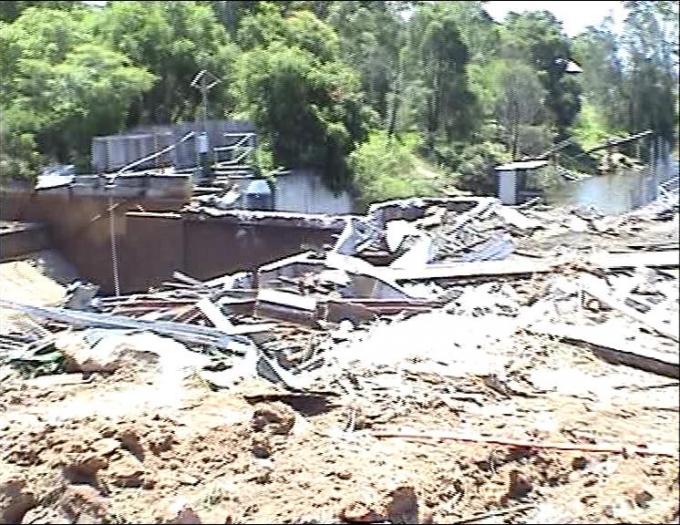 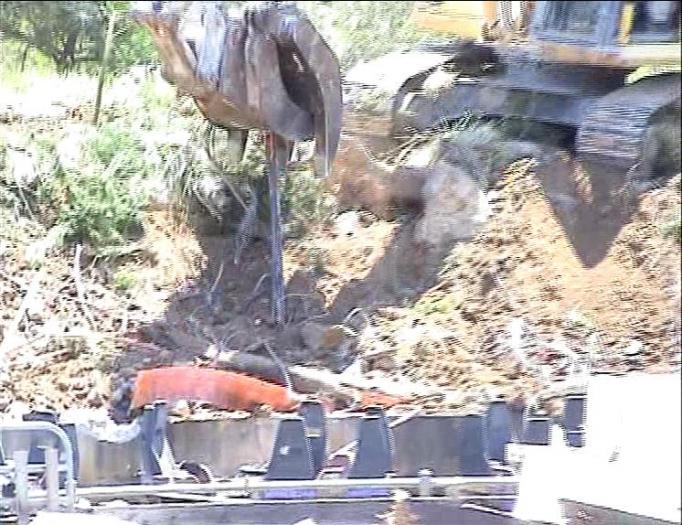 The Demon is completly down but still on site. 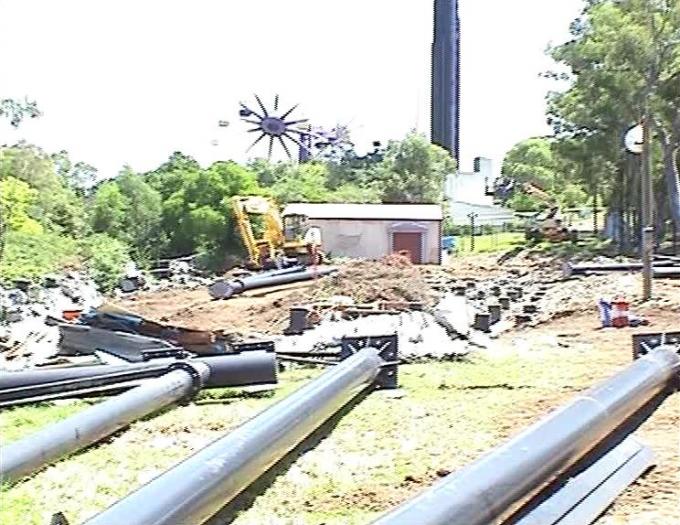 DECEMBER 18 2004
The Wonderland Sign above the front gate was taken down and sold for $1,000 to a Junkyard in Londonderry. 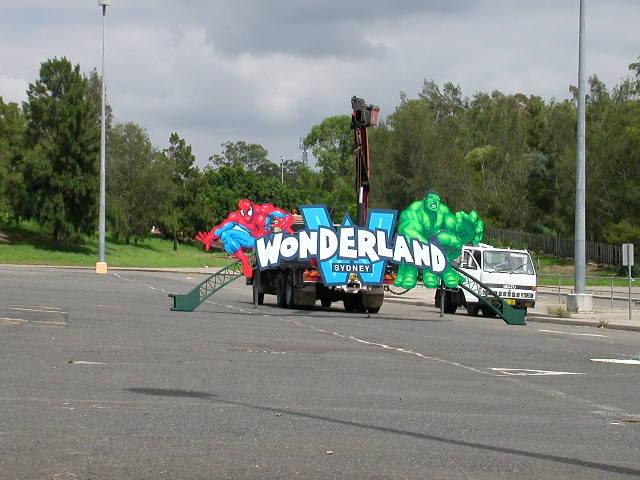 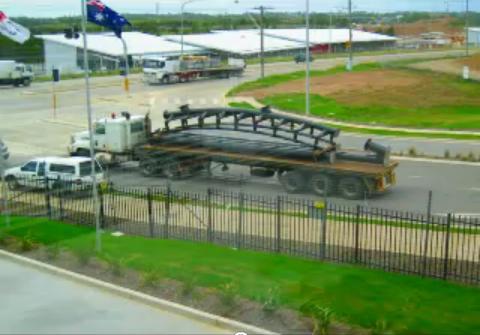 DECEMBER 22, 2004
Demolition and all other work on site is put on hold!
The Canadian company came over to pull the Demon down did not have the relevant demolition licence so they subcontracted it out to some guy at the last minute. This guy thought he could charge what he wanted ($500 an hour to be precise) because there was such urgency to get the Demon down and out. After the Demon was down and out of the park the original Canadian company, who were contracted to pull it down, decided not to pay guy his exorbitant fee using the distance between the two countries as a safe haven. This also impacted on Visionland who purchased the ride and they were also chased for payment even though it was outside their contract with the Canadian "experts". They may have made a verbal agreement to get things moving but verbal agreements can have a nasty habit of changing or disappearing.

All this mess with lawsuits to play out helped cause the lateness of the approvals to demo rest of the park which then caused heat for a certain ex-Wonderland CEO. This in turn damaed the negotiations for Visionland to buy the Bush Beast and Beastie coaster cars.

January 2005
ING now own the park outright, all the rides should have been removed and demoliton well under way but everything is still delayed.

March 12, 2005
Ambulances were called to reports of a person fallen at the 'Space Probe'.
On arrival ambulance officers found a male in his early 30s trapped on a platform inside the tower approximately 30 metres above the ground. SCAT paramedics and a doctor from Careflight arrived on scene to assist in treating the patient.
He was released two and a half hours later and taken to Westmead hospital with a back injury in a stable condition.

August 2005
Site access is granted after 5 months of delays.

The owners of 'HMS Endeavor' (beleved to be Sunway) where given access to the site and started started dismantling the ride. 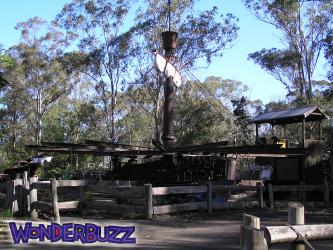 HMS Endeavor was then moved out to the back paddock. 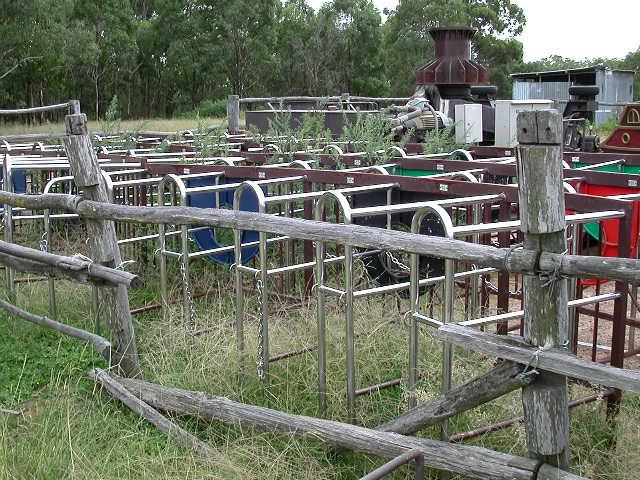 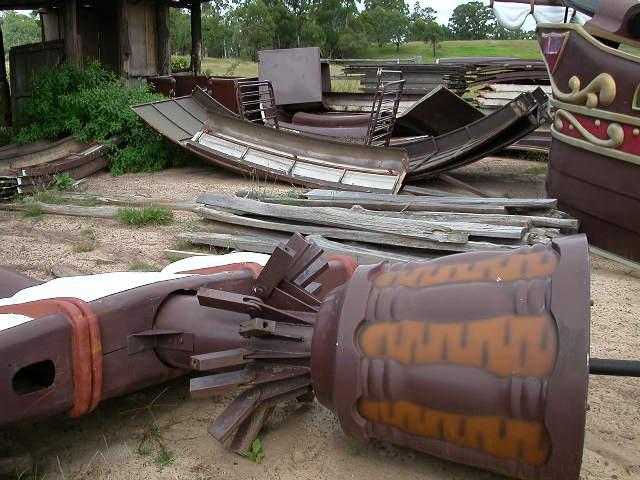 August 22, 2005
Demolition is allowed to continue only in Gold Rush, this is because Probe and Zodaic have not been removed.

Sonfina demolitions is contracted in and they start in Gold Rush near where HMS was and work they way down towards the Bush Beast. 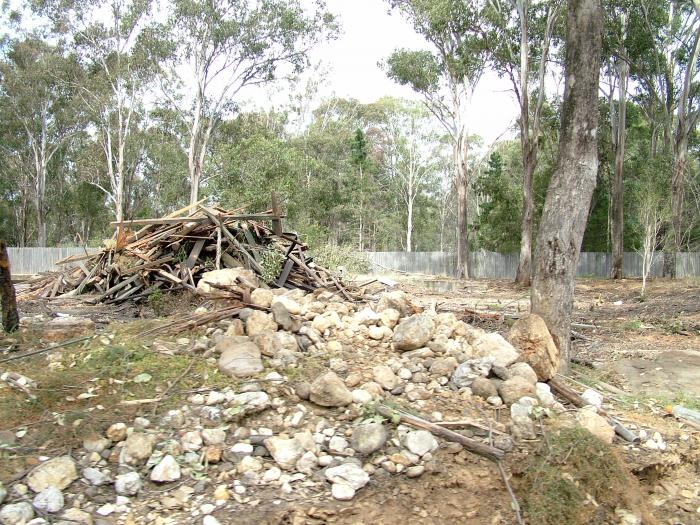 August 25, 2005
The overgrown ground around the Space Probe and the Zodiac was cleared and a cyclone fence was put up around them.
The back road was opened up at the end of the new wonderland drive and a path cleared to allow direct access from Probe & Zodiac to the back paddock. 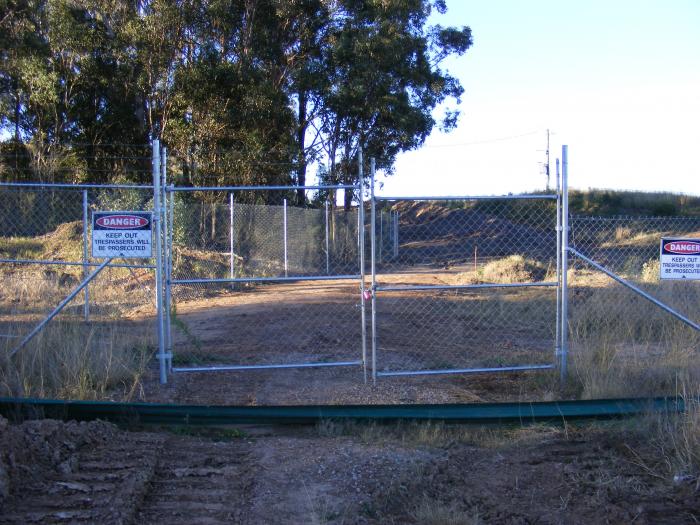 They started the diesel motor on Zodiac and manually operated the lift cylinders as per evac when no power is available, lowering the western arm ready for the gondolas to be removed.

Sonfena demolitions was given the go ahead to finish and complete a non recoverable demolition on the intire park as quickly as possibal, the only areas they where instructed not to touch was the fenced off area around the Zodiac, Space Probe.

Friday August 26, 2005
The Beastie was demolished.

Saturday August 27 6am, 2005
The Bushbeast was demolished.
One of the steal cables from the Sky Rider was taken down and wrapped around the bushbeast and then connected to two D9 bulldozers which tried to pull the bush beast over, the bulldozers moved towards the Snowy River Rampage pushing everything in there path into the Snowy River Rampage with the cable around the Bush Beast and a dozer on each end of the cable they tried to pull the Bush Beast over, The Bush Beast did not go down without a fight, the SkyRider cable snapped several times and in the end they just drove the dozers through the supports with the structure coming down behind them.. 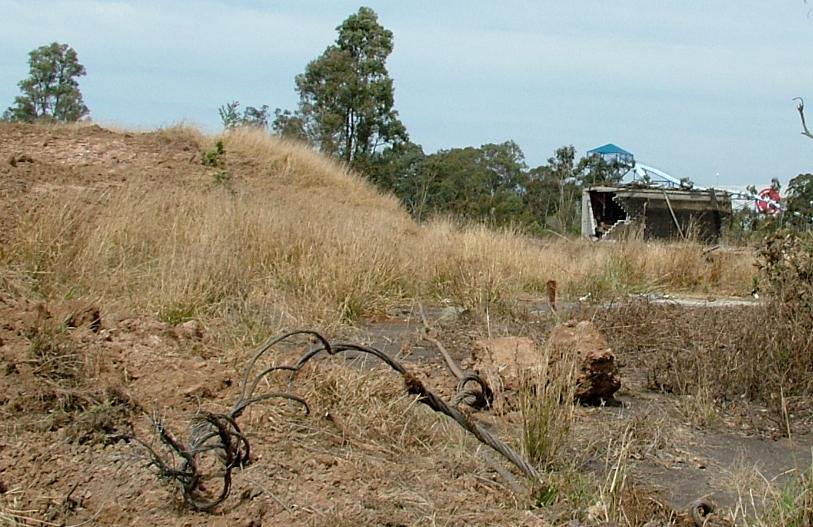 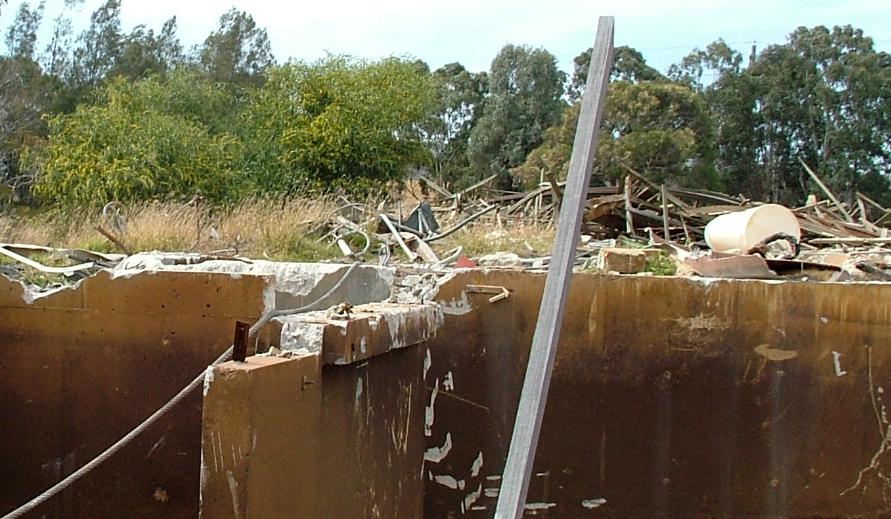 Monday August 29, 2005
They started seperating Bush Beasts sleel track from the wood and demolished the station. 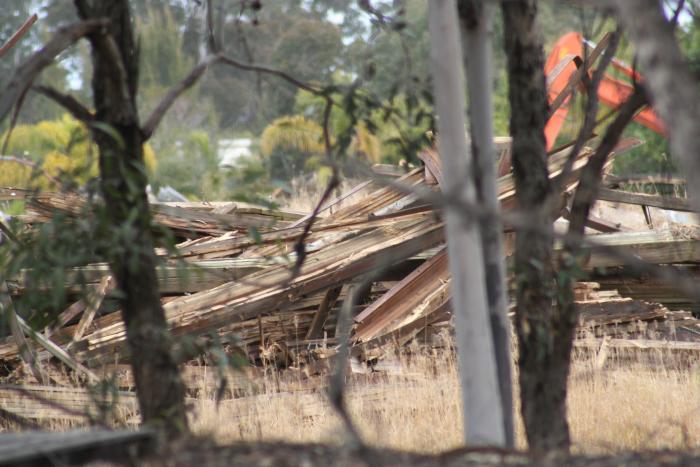